20 years ago Trogotronic sought playability & meaningful control of audio sources with the most elementary means.

20 years after we introduced the first 4 channel Joystick Audio Controller we redesigned the instrument from scratch. The c4 / v5 is the first Iron Cross to have an active Analog Signal Path allowing Dual Modes for each of 4 Channels: off until on OR on until off.

While being able to choose the mode of each channel is in itself a vast improvement over the previous passive models, the active circuit also allows the superhuman ability to cut/edit faster than the joystick can be humanly manipulated in two powerful manners:

First, c4 v5 includes a Dual-Mode Modulator LFO with Frequency Knob. The Modulator introduces impossibly rapid chops any of the 4 active channels with a touch of the button or hands-free tap of the optional m2 Foot-Control patched to the Remote Jack.

Second, patching any external signal of sufficient amplitude to CV/Gate Input allows endless rhythmic possibilities and is activated by the same Button or Remote-Control to chop any active channel.

c4 v5 returns to it’s roots with a Full-Size Premium Joystick mechanism chosen for feather-light feel / intuitive response. c4i uses the same mechanism with integrated illumination that looks incredible in the light & positively possessed in the dims. And, of course, since this is hand-built by the creators of the Joystick Audio Controller it does all of the above better than all the rest, like it always did.

Originally conceived specifically to control unorthodox sound sources that lack intuitive integration/operation in a most intuitive manner, 20 years on the scope of c4 Iron Cross is seemingly endless.

…etc., all at high speed; all in real-time. Although the idea is silly-simple, it’s applications are myriad.

Just in case you haven’t figured it out yet, each channel (1 to 4) is assigned a direction: 1. “north” 2. “east” 3. “south” 4. “west”. Channel Mode-Switches set each Channel’s “resting state”: off until on OR on until off. Each channel is sounded or silenced according to position of it’s Mode Switch as the stick is pushed in it’s assigned direction. Upon release the channel is silenced or sounded—again, according to Channel’s Mode-Switch—as the Joystick returns to center. Pairs of consecutive channels may be sounded / silenced simultaneously in diagonals (say, “north-east” or “south-west”). Each Channel’s LED reports the present mode. “North” channel input is the Master Channel; When nothing is plugged into the other inputs Master Channel signal will be cascaded/distributed to all four outputs.

While complicated to state in words is actually designed to be dead simple in practice. Crucial for fast-cut experimentation with set-ups that use alternative audio & effects such as pedal chains, oscillators, microphones, circuit bent gear, found recordings, multiple effects etc.

Here’s two examples which orient one at a solid jumping-off point of reference to Iron Cross function in practice:

*w/ Thanks to Geronimo

All Trogotronic instruments come complete with pretty much everything needed to “plug & play”. Still, herein are replacement parts & accessories should ever something go missing (plus a few extra options should ever such a fancy strike). 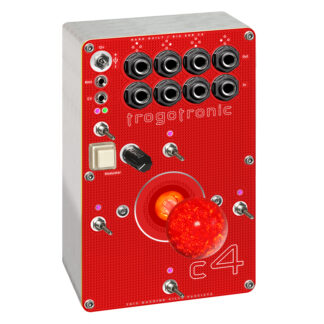